If you’ve ever spent more than five minutes scrolling through Instagram, you’ll soon figure out that restaurants and social media are a match made in heaven. “Social media and restaurants” are, as Forrest Gump and Jenny were,  “like peas and carrots.”

The fact that overhead views of restaurant plates get about the same social media airtime as sunsets indicates that if restaurateurs are willing to commit resources to social media, their investment could experience quite a nice return.

It’s not as simple as setting up a Facebook page, though. To cut through the social media noise, a restaurant needs to be active, interesting and innovative on social media. You need to give people a reason to follow you, and a reason to spread the word. But how?

Inspiration can be taken from many restaurants who have already blazed a social media path. Here are four examples of restaurants that juiced the social media orange for all that it’s worth.

There’s nothing like a free sandwich to get followers’ creative juices flowing. Capriotti’s sandwich shop knows this, and have capitalized by holding semi-regular caption contests on their Facebook page.

By uploading a photo (featuring some form of Capriotti’s sandwich) and offering followers a free meal for the best caption, Capriotti’s generate a huge amount of visibility by having their post be seen by the friends of whoever provides a caption. For a campaign that will have cost the company the grand total of one sandwich, it provides excellent return on investment.

It may also generate some great marketing material, with any awesome slogans that are produced being able to be used by Capriotti’s in future campaigns.

Did you know that Facebook has a feature that allows you to deliver exclusive restaurant coupons to your followers? Well now you do.

Landfall restaurant has done just that, and with great success. Born out of the need for the seafood restaurant to generate business outside of its region’s peak tourist season, Landfall has long used exclusive “follower only” offers to drive business over winter. After Landfall saw the success with the follower only coupon (with 1,011 people claiming the 2 for 1 deal), they used a targeted Facebook ad to broadcast a similar offer to people who lived close by, generating even more business.

Better than receiving a coupon in the junk mail, the exclusivity and personal feel of a social media coupon can be a windfall for the restaurants that are willing to give it a go.

As we mentioned earlier, Instagram was seemingly built to house photos of people’s food. Catch 122 restaurant in the US saw an opportunity, and went for it.

Catch 122 wanted exposure. They were already producing Instagram-worthy dishes, so it was just a matter of getting the customer to take the photos and upload them to Instagram. Luckily for Catch 122, most people don’t need a hell of a lot of pushing. It was as easy as displaying their hashtag (#catch122menu) around the premises – on the walls, in the windows, on the menu – to suggest that the customer might upload something if they feel like it’s worthwhile.

Soon Catch 122 had generated a huge amount of exposure for their restaurant, with patrons sharing their experiences by the hundreds. They also had a massive backlog of professional quality photos of their menu, which they could use however they’d like. Catch 122 has since set up a page on their website devoted to their Instagram tags. 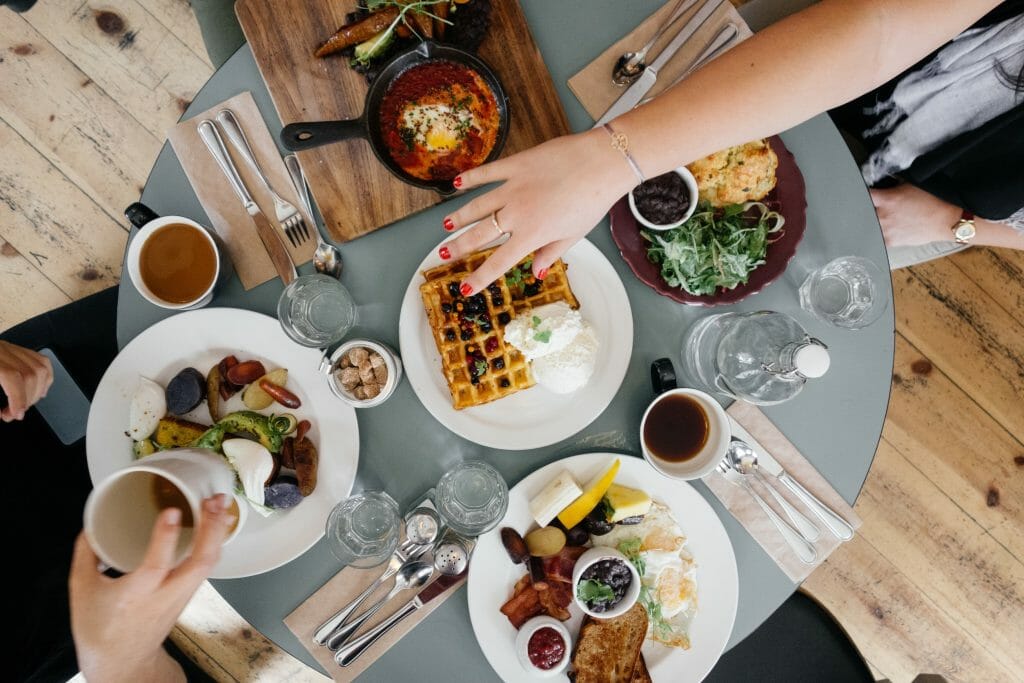 The great thing about social media is that it grants a right of reply where perhaps previously there was none. Restaurant reviews were previously a relatively one way street, but with the onset of Yelp, Urbanspoon and Google, reviews can now be easily found by a restaurant and swiftly replied to.

Paris Creperie is one business who shows how to deal with a negative review. Negative reviews are viewed as constructive criticism, and the contributor is thanked for their remarks. Unreasonably bad reviews are replied to calmly, and with a citation of the facts if the reviewer has gotten their wires crossed. They even reply to positive reviews, thanking the customer for their patronage.

The personal nature of restaurants make them the perfect business to capitalize on the benefits of social media. If restaurateurs play their cards right, they could be enjoying the cheapest and most effective marketing that has ever existed!